Up till here I wrote about how to make a nice environment for your plants without getting the attention you don't need.
I think it's about time I started telling you boys and girls how to grow weed.
Although I grow Haze, which is a long blooming plant, the basic principles go for any weed-plant, so even if you grow Skunk or the likes you could still find some things of interest here.
Man, I think you could even grow tomatoes if you follow my description. ;-)
As it seems to be my normal way to tell things I'll start at the end of our plant's lifecycle.

Weed does not grow for our satisfaction (alone ;-), it grows to multiply itself and Mother Nature's way of multiplying weed-plants is by letting it grow seed. One female plant can produce thousands of seeds. Those seeds fall on the ground or are eaten by birds, and maybe a couple of them will land in 'rich soil' where they'll take care of the next generation of plants.
Outdoors the new life enclosed in these little seeds has to wait until the time is right to start growing.
The plant will start its life in springtime when days are getting longer, and nights shorter.

What happens is that the plant produces a hormone (called phytochrome) that controls - amongst many other things - the growing and blooming of the plant. Though this hormone is being produced day and night, it is disintegrated by light and will not trigger blooming while days are long. In fall, when days get shorter and nights get longer, this hormone will not be broken down as much anymore and blooming will occur.

Once people found out that it is the length of day and night - called photoperiod - that is responsible for the blooming of certain plants, they started to experiment. Most of you probably know the example of the Christmas cacti, or Christmas rose that is grown under special light conditions so it will bloom around Christmas Eve.
There is not much difference with the conditions weed is grown indoors. An expert grower can flower his or her plants at will, just by shortening the days to twelve hours.
Keep your plants under eighteen hours of light per day, and they will never start blooming.

This gives us a very interesting opportunity because it means that you can take a plant, of which you are sure that it's a female of good quality, and keep this plant in a vegetative stage. This one plant could provide you with cuttings for a very long time, so you would always know in advance what you were growing.
Although in nature marijuana is one-year plant, I know of so called 'Motherplants' that live already for fifteen years or more and still provide excellent cuttings.
Off course one has to refresh this plant after a while with a nice looking cutting of it's own, but a cutting of a plant is always a one to one copy of it's originator. All the DNA of the original plant is in the cutting.
If you take care of the ladies well, so they won't catch any diseases, you could go on forever with just one plant (well, 4ever is a very long time, but I think you catch my drift ;-). After twenty years, it could still be as potent as if it were twenty weeks old.

And this, my dear friends, is what we call a mother-plant.

Off course we first need a plant, and since most of us start with seed, let's seed:

Seeds are best to be germinated in a warm, moist place. Place the seed on wet cotton wool until it germinates. Also it's best to keep them in the dark until you see the tip of the root breaking through the seed's coating.
You could even give it a little help after a short week by gently squeezing the seed's side rim till it knacks open. Of course this is a trick that could lead to disaster so play it safe and let nature have its course.
Once sprouting, you have to provide a place for the little root to grow in. this could be earth of course, but if you plan to grow hydroponics you might as well start now by placing it in a small rock wool cube

TIP: Even if you plan to grow on dirt, you could still grow your seed (or cutting) in rock wool and place the whole bunch (including wool) in a pot of earth later.

The little plant needs light, eighteen hours per day is a rule of thumb.
Though some people will give you the advice to place mothers, seedlings, and cuttings under twenty-four hours of light per day to prevent blooming, I am not in favor of that practice. I found out that the total absence of a dark period causes a lot of stress to plants. Eighteen hours of light and six hours of darkness will still keep your plants in a vegetative state and give them some time to rest and catch up.

Once your little seedling gets a few leaves with 'fingers' it's starting to look like a little plant.
Because after this stage the treatment of seedlings is basically the same as the treatment of cuttings, I suggest we discuss cuttings now and proceed with the story later.

Although clones seems to be a normal word for cuttings in the US of A, people in Europe think of sheep called Dolly, hearing this word. That is why I will use the word cuttings instead.

Most people (in Holland) buy cuttings to flower. Even if you don't plan to change this line of working it makes sense to know how they are grown, so read on.

A cutting is just what the word says; it's a piece of branch that's cut off from the original (mother-) plant.
Let's have a look at a full-grown weed plant; you'll see that it's a stem with side branches, opposite pairs to the bottom, which shed along while going to the top. These side branches grow other branches, which hold up smaller branches, supporting ... uh well, I think you'll get the picture.
Now have a look at the smaller branches and again there's the pattern. Leaves start in pairs while further down they separate. In the axis of these leaves with the branch (called node) you will see the premature start of yet another branch. The peaces of branch in between two (sets of) leaves are called internodes.
It is the last two till five inches of these branches you want as a cutting, but hold your horses, there's more to it than just cutting them of.

Your fresh cutting will have a hard time to survive the first week, so you have to help it a little.
Cells that used to be part of a branch suddenly have to adjust to life under the ground and they have to develop roots. Certainly a difficult job, but don't worry as weed is an herb and a strong one too.
Like I said, there's new growth in the joint of leave and stem, so you want to save that on the mother plant. On the other hand there's the fact that cuttings do better if you leave this node on, so we have to plan a little.

First you have to decide how long you want your cutting to be. If you cut a somewhat bigger plant you could bloom it (a little bit) earlier, but it's also harder to keep alive.
The most important thing however is that all of your cuttings are about the same size.
Normally I always use my index-finger as a ruler. The cutting will be about as long as my finger is and the 'end joint' (of my finger ;-) goes under the ground or wool.

Another thing you have to think of is that every single cutting needs at least one full-grown leave, i.e. with five fingers, though you might want to cut it in half (later). This leave is needed to give the plant nutrients for the first week(s) of it's life; it will probably turn yellow/brown and fall off later so don't worry and write me about that ;-) 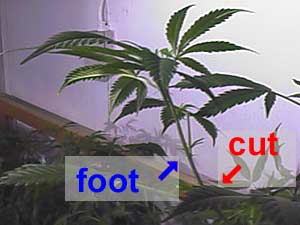 Take a nicely grown branch and decide which node you want to be the foot of your new plant. With the scissors you cut the stem just above the previous node (i.e. the one below) from this branch. 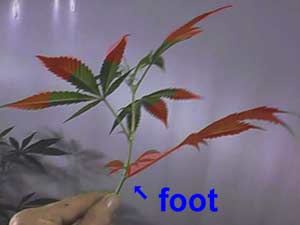 You will now have a cutting that's a bit too long, and (most likely) has too many leaves to survive.
The cells in the leaves will still evaporate water, but the little plant has no roots. To minimize evaporation you have to cut of most, but not all of the leaves. Also all of the growth that's on the last node (your 'rooting' point) has to go.
To 'clean up' the cutting you use the razor blade, and the last thing you do is to cut the stem, just below the node, in a 45 degrees angle.
How much leaf you leave behind depends on how big you make the cutting. More is better, but harder to keep alive.
I would say the minimum you need is one square inch of leave on a cutting of about 1.5 inch long. 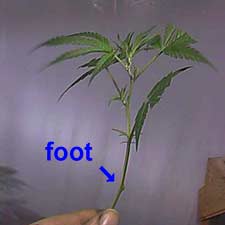 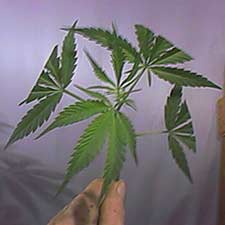 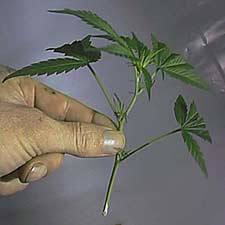 If you root your cuttings in rock wool (which you have prepared beforehand by soaking them in clean water) you place the fresh cutting in the cube right away. 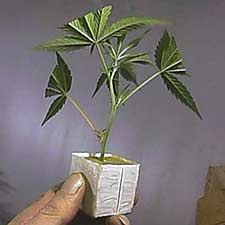 After you're done with all of the cuttings you fill the tray which hold the rock wool cubes with as much water as needed so all the cuttings will have their feet under water.

If you root in soil, place your fresh cuttings about an inch deep in a glass of water for a night so they have a chance to fill themselves up.
The next day you place them in the soil. Besides giving the cuttings something to drink, standing in water for a night seems to be good to get rid of unwanted debris.

Do not give these plants any direct light right away; it's okay to leave the lights of for the first night. Sometimes I forget, and they won't get light for a whole day, but it doesn't seem to bother them.
The next morning you have to throw away the water they stood in and of course the earth people have to plant the cuttings in dirt.
After doing so you place the cuttings under eighteen hours of light and that's basically it, let nature do it's thing.

It's very important that, from this day on, you keep the growing medium moist, but not soaking wet! This really could mean the difference since the new roots need oxygen to form, and water is a real bad transmitter for gasses. 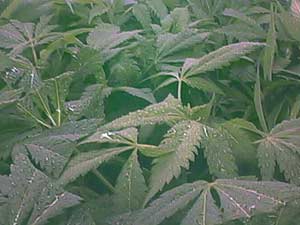 Besides light, seedlings and cuttings need warmth. Best thing is to keep temperatures at a minimum of 20 °C, but this might be as high as 25 °C and I do mean root temperature here!

Only after enough roots have been formed, you start with giving a very mild nutrient-solution. I would say 10 - 15 % of the 'normal' strength is good enough for starters. If you grow on soil you only give water because there's plenty of nutrients available there for your plant to getit through the first weeks.

A word of warning! Contrary to animals, plants do not get 'fatter' by giving them more food. In fact they will die, mostly on dehydration because of Nitrogen poisoning.